There are two types of toddlers: The mysterious calm ones who like to sit quietly … and the 99.9 percent who don’t stop moving until every toy, twig and piece of fuzz on the ground has been explored. At 18 months old, Sydney Thomas definitely fell in the latter category. 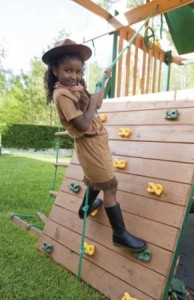 So her grandmother and mother knew something was not right when the little girl spent the day lying on the couch. There were other symptoms, too. She had been really thirsty, and her diapers were unusually wet.

“I realized how serious it was when the doctor cleared the waiting room,” says Nicole Thomas, Sydney’s mother. “They sent us to a pediatric E.R., and the doctor in charge took one look at her and knew what was wrong. Her eyes were beginning to roll up in her head.”

Sydney was diagnosed with Type 1 diabetes, an autoimmune condition that prevents the pancreas from producing enough insulin. Nearly 15,000 children are diagnosed with the disease in the United States each year, according to the National Institute of Diabetes and Digestive and Kidney Diseases.

Not even sure what questions to ask doctors, Thomas immediately revved into research mode, devouring information about the disease.

“At this stage of the game, I still thought I could conquer diabetes,” Thomas says. “At some point, I realized if we can manage it and hit her (blood sugar) target most of the time, it will be OK.”

Six months after Sydney’s diagnosis, she attended a conference held by JDRF, a national foundation devoted to Type 1 diabetes. There she met a researcher who referred her to Dr. Desmond Schatz, medical director of the UF Diabetes Center of Excellence. She liked the thought of Sydney coming to a place focused not only on treating patients, but also on uncovering more about the disease and developing and testing the latest treatments. Thomas began making the two-hour drive north from Orlando every few months so Sydney could get her care at UF.

The Diabetes Center of Excellence gives parents a crash course on taking care of a child with diabetes, and doctors keep close tabs on their patients between appointments. Thomas spoke to Schatz every week through email and sent him color-coded charts to show how they were managing Sydney’s blood sugar levels. She also switched from insulin injections to an insulin pump, a device that looks a lot like a pager and shoots a steady stream of insulin to the body through a narrow tube.

Now 8, Sydney works to keep her diabetes under control, with the help of her mom and Schatz.